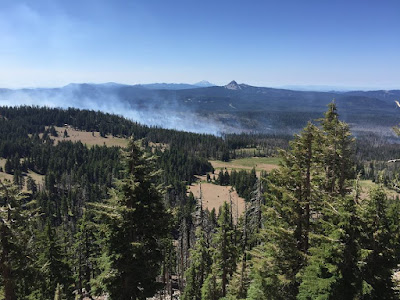 The Bybee Creek Fire is 720 acres in size and is 12 percent contained. Nearly 300 personnel are assigned to the task of confining the fire, which is located in Crater Lake National Park. Firefighters are being supported by an air force of seven helicopters, four air tankers and eight wildland fire engines. The fire started July 28 and its cause is under investigation.

The Bybee Creek Fire slowed its spread Tuesday and firefighters were able to fight the fire directly from the Rim Road. The West Rim Road is still closed from the Rim Village to the North Junction until further notice, however, it is possible to travel through the park on the East Rim Road.

Firefighters are using several methods to suppress the fire’s growth, including direct and indirect methods. Today, a fuel break (handline) was completed around the fire to stop the fire from spreading.

Crews have prepared for fire operations along an old fire line and continue to utilize helicopters for water drops. Aerial water scoopers are also dropping water on the leading edge of the fire. If weather conditions are favorable, firefighters will put fire to the ground to consume the fuel between the fire and the handline.

Firefighters are working to achieve the goals of keeping the fire east of the Pacific Crest Trail, south of the Lightning Springs Trail and west of the Crater Lake Rim Drive.

Fire danger remains high, the public should be aware of their surroundings and prepared for changing conditions. A Level I Evacuation Notice has been issued for the Rim Village and Park Headquarters area. The Level I Notice informs residents and visitors to “be ready” for a potential evacuation if the fire approaches these areas. Mazama Village and other areas in the park are not affected by this notice.

Gusty winds are expected to continue for the next several days.

The Park is open, the section of the West Rim road that is closed will not diminish your visit. It is still possible to drive the East Rim, enjoy the views from Rim Village and experience a boat ride around the Lake.