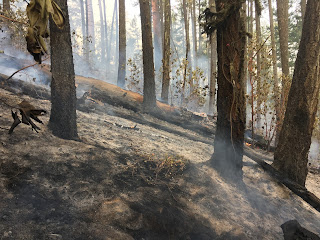 Firefighters from the Oregon Department of Forestry’s Southwest Oregon District have already tackled six wildfires overnight; however, additional new fire starts are expected to pop-up as the temperatures begin to rise throughout the day. ODF’s Southwest Oregon District, which encompasses 1.8 million acres of land in Jackson and Josephine Counties, was pummeled with nearly 200 lightning strikes in a few short hours yesterday evening. Only a quarter of those hits were positive strikes, meaning the strikes are more powerfully charged compared to a negative strike; therefore, more likely to spark a wildfire. Firefighters will be gridding the landscape surrounding those confirmed positive strikes in order to try to catch any new starts while they are small. 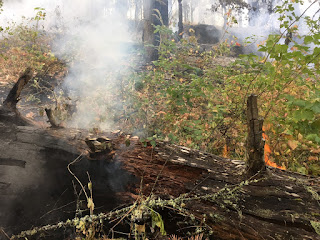 Of the six wildfires located in the past 12 hours, five of them are 100 percent lined and 100 percent mopped up; all five were stopped at less than one acre in size. The sixth fire, being called the East Antelope Fire, was recently mapped at 3 acres. The fire burning six miles east of Roxy Ann Peak on Bureau of Land Management (BLM) forestland is close to being fully lined. Firefighters will continue making progress on this fire until we reach 100 percent containment.
In addition to firefighters patrolling on the ground, a FLIR-equipped aircraft is lending a helping hand to the District today. This aerial resource will utilize thermal imaging technology to help detect new starts throughout southern Oregon from high above all of the existing smoke. Additionally, ODF Southwest has its air attack platform and helicopters available for initial attack, as visibility allows.
With forecasted thunderstorms anticipated to roll into our region today, ODF firefighters will remain vigilant – knocking down new fires as quickly as possible. However, we need your help in preventing any and all human-caused starts. We would like to remind everyone that the fire danger level on Oregon Department of Forestry protected lands in Jackson and Josephine counties remains at “extreme” (red) today. For a full list of the public restrictions currently in place, visit our Facebook page: @ODFSouthwest or our website: www.swofire.com.
###