Crews have completed a fire line around the Atlantic Avenue Fire in White City, halting the potential for further spread in the area. A more accurate measurement of the fire was released this morning putting it at 115 acres. Crews from both Fire District 3 and the Oregon Department of Forestry Southwest Oregon District will continue working on the interior mop up of the fire today. 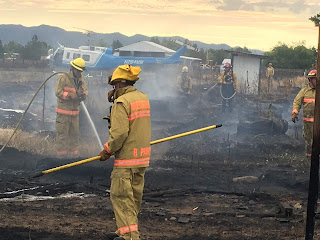 Firefighters conducted a damage assessment late last night once the fire activity settled down. Multiple vehicles including two RVs, one bus, and six boats; four outbuildings; and one vacant residential structure have been deemed a total loss. There have been no public, firefighter, or animal/pet injuries reported. Crews will continue working with the community in the upcoming days to assess any further damage on personal properties. 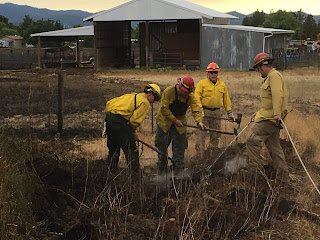 After a thorough investigation by Fire District 3, ODF Southwest, and Jackson County Sheriff’s Office, a 14-year-old girl lighting fireworks was found to be the cause of the fire. Deputies will refer the case to the Jackson County District Attorney’s Office for adjudication.
The Atlantic Avenue Fire was first reported just after 4 p.m. Thursday, July 5. The wind-driven fire grew rapidly reaching 100 acres within an hour of ignition. In addition to ODF Southwest and Fire District 3 engines, one of our Rogue Valley Structural Strike Teams was activated bringing additional assistance from Medford Fire-Rescue, Jackson County Fire District 5, Illinois Valley Fire District, Applegate Valley Fire District, and Lake Creek Rural. Highway 140 and Kershaw Road, along with private, residential roadways were temporarily closed for fire traffic and public safety by our law enforcement partners including Oregon State Police, Jackson County Sheriff’s Office, Medford Police, and Eagle Point Police. By 8:30 p.m., a majority of the fire’s spread was stopped, and all lanes of traffic were reopened. Firefighters worked overnight to complete the perimeter fire line and begin mop up operations. 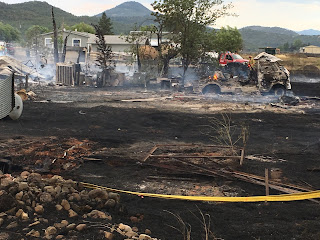 We are continuously thankful for our partnerships with our city, county, private and state agencies throughout our region, not to mention the countless community members willing to help their neighbors. Yesterday’s conditions were ripe for a wildfire that could have spread to even greater lengths. Due to the speedy and superb partnership, this fire was deemed “controlled” by nightfall. 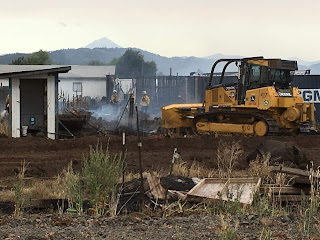 We would like to remind everyone that the fire danger level on Oregon Department of Forestry protected lands in Jackson and Josephine counties will remain at “high” (yellow) for the time being. This means that our shut down time for several power-driven tools is from 10:00 a.m. to 8:00 p.m. Please do your part to eliminate any activities that may produce a spark within our community. For a full list of the public fire restrictions currently in place, visit the ODF Southwest Facebook page, or www.swofire.com. For additional fire information within the Fire District 3 coverage area, please visit the Fire District 3 Facebook page.
###