Oregon Department of Forestry firefighters routinely run into the face of danger to save others. We protect our communities from wildfire and act as stewards of the land. But, what about working with communities long after a wildfire is out? 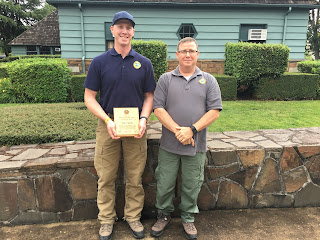 This is exactly the outlook and actions of one of our own, Tyler Averyt.
Tyler has given selflessly in support of the agency, the Firewise program and most importantly, the community. Because of his demonstrated passion and commitment to the department, Tyler has been selected as the recipient for the “2016 Seasonal Firefighter Leadership Award” for the Oregon Department of Forestry.
“I’m so proud of the type of firefighter and person Tyler has become. Tyler is one of many high caliber people on our team serving our district and the people of Oregon,” said ODF Southwest District Forester, Dave Larson.
Tyler is a 12-year veteran of the Oregon Department of Forestry. For the past year he has been assigned to a dual role as a Wildland Firefighter and Firewise Coordinator for Josephine County. In this role, Tyler is called upon constantly to do homeowner inspections in order to gain community involvement and interest in becoming a Firewise Community. While informing and assisting residents about reducing the risk of wildland fires on their properties, Tyler is also a fulltime firefighter for the district. He juggles fire calls and Firewise project implementation and planning, year-round. 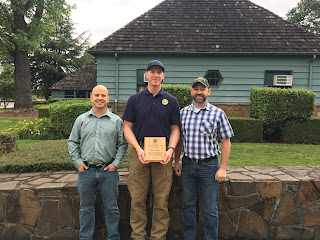 “He is an employee who is highly motivated, sets goals and seeks out opportunities to accomplish these goals.  He is an outstanding representation of the future of the Oregon Department of Forestry,” said Shelly Hoffer, ODF Southwest Wildland Fire Supervisor.
The department chooses one firefighter throughout the entire state to recognize on an annual basis. We are ecstatic that this year’s honor goes to someone as hardworking as Tyler who has been dedicated to the Southwest Oregon District in Jackson and Josephine Counties since 2006.
“Being able to watch Tyler grow both personally and professionally over the past decade has been remarkable,” said ODF Southwest Assistant District Forester, Tyler McCarty, “I’m so proud of him; I feel like a proud dad.”
Tyler continuously demonstrates a high level of commitment to his training, public education, fire prevention and other agency operations. His allegiance to his fellow firefighters not only supports our department policies, but he works to help others achieve personal goals as well.
“He sets the example day-to-day. He is always the pillar in our agency that people look up to and respect. He helps empower people to succeed,” ODF Southwest Protection Supervisor, Karl Witz.
Tyler is seen as a leader and the “go-to” person for questions. He is skilled in bringing others together to work as a team, recognizing each person’s unique skills and talents, and how those will best contribute to success.
“I appreciate his willingness to support and provide assistance on tasks and projects no matter how big or small they are,” said Kyndra Von Essen, ODF Southwest Wildland Dispatcher.
He constantly goes beyond his normal duties and expectations to make visible improvements that have enhanced the agency’s ability to reduce fire losses and to better serve the community.
“The Firewise community of Forest Hills could not be more pleased to congratulate Tyler Averyt on winning this award. He is so deserving; he has supported us 100% by starting new programs, improving old ones and has an energy level that is unmatched.  He is definitely a spark,” said Ruth and Gene Lambert, Firewise Community members. 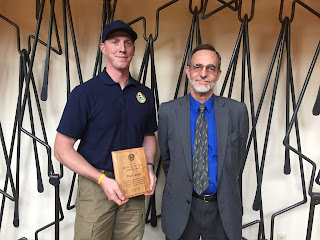 Not only does he excel at his day-to-day job, but takes pride in every aspect of his work including fire team assignments that give him the opportunity to face new challenges. In the past year, he served on several fire assignments in various positions, including Task Force Leader, Heavy Equipment Boss and Contract Administrator. He continues to increase his skills and abilities in wildland fire leadership by serving as a Trainee Air Tactical Group Supervisor and working on his task book as a Helicopter Manager. He is always challenging himself and willing to take on anything thrown his way.
Tyler was nominated for this award by his colleagues and supervisor, Shelly Hoffer, Kyndra Von Essen, and Karl Witz. His entire team here at ODF Southwest Oregon district could not be more proud of Tyler and his achievements. We are thrilled to have him as part of the ODF Southwest family.
“The camaraderie is the best part, no words can really describe it. We are a team through and through. Every day is different and comes with a new challenge, and as a team we overcome those challenges together. It’s rewarding to see the impact we can have on our local community,” said Tyler Averyt, the 2016 Seasonal Firefighter Leadership Award recipient.