At approximately 6:15 p.m., an Oregon Department of Forestry Southwest Oregon District reconnaissance aircraft was searching for a report of smoke in the area just north of Butte Falls. Air attack not only located the Olsen Fire which was knocked down at 1/10thof an acre, but also spotted a small, steady column building roughly 10-15 miles away. Immediately, multiple ODF Southwest engines, dozers, water tenders and two Type 2 helicopters were dispatched to the Burnt Peak Fire.
The initial size-up of the fire from the air was estimated to be 1-3 acres. The fire was quick moving, burning in steep terrain with wind shifts manipulating the direction of growth constantly. An additional Type 1 helicopter and two LATs (Large Air Tankers) were ordered to assist preliminary air operations. From 6:45 p.m. til 9:00 p.m., a total of five runs were made with the air tankers, which is equal to 15,000 gallons of retardant. Dozens of water drops were made collectively by the three helicopters. In order to continue using our air firefighting resources, a TFR (Temporary Flight Restriction) will be in effect beginning tomorrow at 6:00 a.m. For more information regarding the TFR over the Burnt Peak Fire as well as others in effect throughout the region, please visit www.tfr.faa.gov. 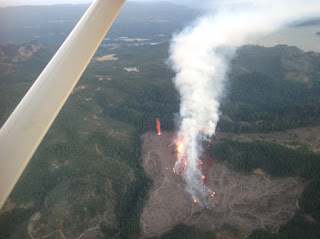 While air operations worked on the fire, ground resources were facing accessibility challenges due to steep slopes combined with limited road infrastructure. By the time the first engine engaged with the fire, the size was estimated at 20 acres. Crews worked on attacking the fire as aggressively and directly as possible; however, the wind shifts created a dangerous and difficult fire fight as spotting continued along the ridgeline. Firefighters were able to begin flanking the fire near sundown, but anticipate gusty winds throughout the night.
The Burnt Peak Fire, burning three air miles north of Lost Creek Lake, is estimated to be 60 acres as of 11 p.m. tonight. The cause of the fire is under investigation. There are no structures threatened; no evacuation notices have been issued. The closest structure is roughly three miles southwest of the fire along Elk Creek Road in Trail. There will be heavy fire traffic throughout the area. Please avoid the road, if possible.
Although no evacuation orders are in effect, it is a good time to make sure your family’s evacuation plan is refreshed and ready. To learn more about the state of Oregon’s three level evacuation process and how you can be prepared when wildfire strikes, visit the Rogue Valley Emergency Management page. The fire danger level throughout Jackson and Josephine Counties moves to ‘extreme’ Monday. For a reminder of what public fire restrictions will take effect, visit our Facebook page, ODF Southwest.