ODF Southwest firefighters worked throughout the night constructing fire line on the Flounce Fire, located approximately 12 miles northeast of Shady Cove. The Flounce Fire was first reported as two separate fires around 4:56 p.m. Monday. The main fire burned nearly 50 acres by sunset, and the two fires joined shortly after burning close to 200 acres by midnight. The lightning-sparked fire is approximately 250 acres this morning. 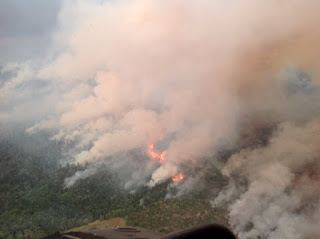 As of early this morning, a Level One (Be Ready) evacuation notice has been issued by Jackson County Emergency Management for residents on Evergreen Drive and Lewis Road near Prospect. A citizen alert has already been sent to the homes impacted by the notice. This is a precautionary measure, as we anticipate additional thunderstorms this week. There is a potential for growth along the northeast and northwest flanks of the fire; however, it is not anticipated to spread to the south toward the homes currently under the evacuation order due to the contingency line in place.
The topography ranges from moderate to very steep. The rugged terrain was one of the primary challenges over the past 12 hours. Still, crews were able to get one mile of hose lay in place in order to help control fire activity. Today, firefighters will continue to knock down the active portions of the fire, as well as continue building control line around the perimeter. Two Type One helicopters have been order for the fire, as well as four Type Two helicopters, one Large Air Tanker (LAT) and one air attack platform. Recon of the Flounce Fire is underway as of 9:00 a.m. this morning
Along with Oregon Department of Forestry crews from the Southwest Oregon District’s Medford and Grants Pass units, a Rogue Valley Strike Team was activated. The strike team consists of structural protection units from Jackson County Fire District 4, Jackson County Fire District 5, Jackson County Fire District 3, Medford Fire-Rescue, Jacksonville Fire and Ashland Fire-Rescue. Ten-man and 20-man crews are also on scene, and several Oregon Department of Corrections inmate crews have arrived to assist with fire line construction. In total, roughly 250 personnel are currently working the fire with more resources on the way.
Weather conditions today call for temperatures in the low 90’s, relative humidity is roughly 30 percent, and west winds at 3 mph. A Red Flag Warning has been issued from noon to 10 p.m. with abundant lightning in the forecast. With ODF Southwest Oregon District resources already stretched thin, we are encouraging everyone to hold each other responsible for following fire restrictions currently in place. Don’t let your actions become a statistic.
The fire danger level on Oregon Department of Forestry protected lands in Jackson and Josephine counties is “extreme” (red) today. For a full list of the public restrictions currently in place, visit our Facebook page: @ODFSouthwestor our website: www.swofire.com.
###