A force of more than 300 firefighters worked throughout the day to relocate fire lines on the northeast and northwest flanks of the Flounce Fire, burning on private and Bureau of Land Management forestlands roughly 12 miles northeast of Shady Cove. The fire grew along these flanks today but a wide bulldozer-constructed fire line along the southern end of the fire held as wind gusts put it to the test. Although a few spot fires were located outside of the western flank, they were knocked down and contained rapidly.
As of this evening, the Flounce Fire has reached 600 acres and is eight percent contained.
Fire camp was set up today at Touvelle State Park off Table Rock Road in Central Point. The park will remain closed to the public until further notice. Please be cautious of increased fire traffic throughout the area. 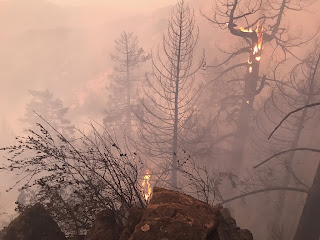 Early this morning, a Level One (Be Ready) evacuation notice was issued by Jackson County Emergency Management for residents on Evergreen Drive and Lewis Road near Prospect. The evacuation order will remain in effect until further notice as a precautionary measure, as we anticipate additional thunderstorms this week. A structural protection strike team stood by today to protect homes and other structures in the event the wildfire posed a threat. The team is assembled from engines and personnel from fire districts in Jackson and Josephine counties.
Overnight, the focus is to continue to improve control lines surrounding the homes under the evacuation order.
“We need to take advantage of the weather when we can. The fire did receive a fair amount of rain which means we have an opportunity to cover a lot of ground tonight,” said Herb Johnson, Flounce Fire Incident Commander.
Tomorrow at 5:00 a.m., the local ODF Southwest Oregon District Type 3 Incident Management Team will be handing off the Flounce Fire to the Oregon Department of Forestry Incident Management Team I. This will alleviate our local resources so that they can continue to have an aggressive initial attack throughout Jackson and Josephine Counties.
The Flounce Fire was first reported at 4:56 p.m. Monday. The cause is attributed to lightning that stemmed from a thunderstorm Monday afternoon.
Thunderstorms are anticipated for the next two days. With ODF Southwest Oregon District resources already stretched thin, we are encouraging everyone to hold each other responsible for following fire restrictions currently in place. Don’t let your actions become a statistic.
The fire danger level on Oregon Department of Forestry protected lands in Jackson and Josephine counties is “extreme” (red) today. For a full list of the public restrictions currently in place, visit our Facebook page: @ODFSouthwest or our website: www.swofire.com.