Another round of thunderstorms yesterday evening triggered multiple lightning strikes which sparked fires on ODF Southwest Oregon District-protected land. Throughout Jackson and Josephine Counties, approximately 250 strikes were recorded. Although firefighters have been running on endless reports of smoke, as of 11:00 a.m., only ten of the reports have turned into confirmed fires. While most of those fire starts are already knocked down and contained, there is one that firefighters are currently engaged on both on the ground and in the air.

The Reuben Fire, burning roughly five air miles north of Grave Creek Bridge and the Rogue River Trail, is estimated to be roughly five acres in size. Currently, there are over 30 firefighters on the ground and several aircraft making progress on the fire. In the air, three Type 2 helicopters, two Type one helicopters, four SEATS (Single Engine Air Tankers) and one air attack platform are working the fire. One LAT (Large Air Tanker) is currently on-order. 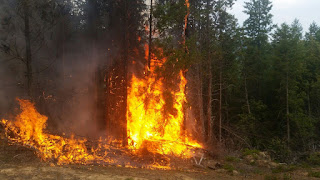 We will be responding to additional smoke reports throughout today which will really stretch our initial attack resources thin across both counties if we continue to get additional fires popping up. In addition, the weather forecast calls for lightning again tonight. We are really urging our community to stay vigilant and call 9-1-1 with smoke reports throughout the evening.

We would like to remind everyone that the fire danger level on Oregon Department of Forestry protected lands in Jackson and Josephine counties remains at “extreme” (red). For a full list of the public restrictions currently in place, visit our Facebook page: @ODFSouthwest or our website: www.swofire.com.