Swamp Creek: 16 miles north of Rogue River. Estimated at 5 acres. Ground resources were able to complete a control line around the fire; however, snags are threatening the line. The fire is 20% contained. No structures threatened.

Little Grayback: 8 miles east of Cave Junction. Holding at 2 acres. Several ground resources were engaged today securing the perimeter. Smoke will continue to be present overnight and into tomorrow due to continued suppression efforts. No structures are threatened.

Spencer Creek Fires: Highly visible from Grants Pass, Applegate, Williams, Illinois Valley, and I-5. 12 miles south of Grants Pass. Approximately 3-5 fires in the area. Total fires estimated at 80 acres. Firefighters worked tirelessly on this series of fires. By the peak heat of the day, one of the fires made a significant push to the ridgetop. Overnight, several firefighters and heavy equipment will be focusing on securing the perimeter. No structures threatened.

Grave Creek Fires: Series of fires off Upper Grave Creek Road, visible from Wimer. Approximately 17 miles north of Rogue River. 6-7 fires in the area. Total fires estimated at 100 acres. Countless aerial resources were dedicated to this incident until sundown. The fire rapidly grew toward the end of shift near peak burning hours in triple digit temperatures. Overnight, crews will continue flanking the fire, working to achieve a controlled perimeter. No structures threatened.

Fielder: North of MP 53 on I-5. Approximately 7 acres. Firefighters established a hose lay around the fire’s perimeter today. Overnight, firefighters will work on strengthening and securing the perimeter. No structures threatened.

The Oregon Department of Forestry Incident Management Team 2, led by Incident Commander Chris Cline, will be arriving tomorrow to take command of a series of fires within the Garner Complex. The local district, ODF Southwest, will remain command of the Wagner Creek Complex, as well as other additional fires as they pop up this week.

Green Top Mountain: 5 miles northeast of Eagle Point. Holding at 125 acres. Roughly 90% of the perimeter control line is complete as the landscape has posed several challenges; however, the containment has boosted to 40%. Ground and aerial resources continued to fight this fire aggressively today, and are working on completing the perimeter’s control line overnight. No structures are threatened.

Sterling Creek: 7 miles south of Jacksonville. Holding at approximately 100 acres. Firefighters completed a control line around the entire perimeter of the fire today. The fire is 20% contained. Ground and aerial resources worked the fire all day. Level 3 “Go!” evacuations have been reduced to a Level 1 “Be Ready” evacuation notice. Rogue Valley structural units played an integral role involving home protection and defense. Fire crews will continue to knock down the interior perimeter of this fire overnight. 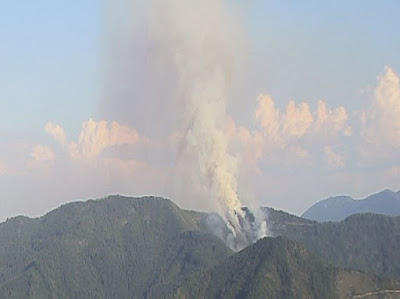 Trail Creek & Elk Creek Drainage: Multiple fires are burning in the area surrounding Cleveland Ridge, Elk Creek, and the Trail Creek area which is roughly 5.5 miles north to northwest of Shady Cove. There are approximately 8 confirmed fires on ODF-protected land within the drainage. The largest fire in this area is estimated at 12 acres. Ground and aerial resources were engaged the entirety of today. Night shift ground resources will continue to knock down and work on control lines overnight. No structures are threatened.

There are several other fires in Jackson and Josephine Counties that we are working diligently to knock down and contain. Our air attack platform will be performing reconnaissance flights the entire day. Please know that all other ODF fires are an acre or less at this time, and are posing no threat to our communities.

Evacuations: No evacuations currently in place.